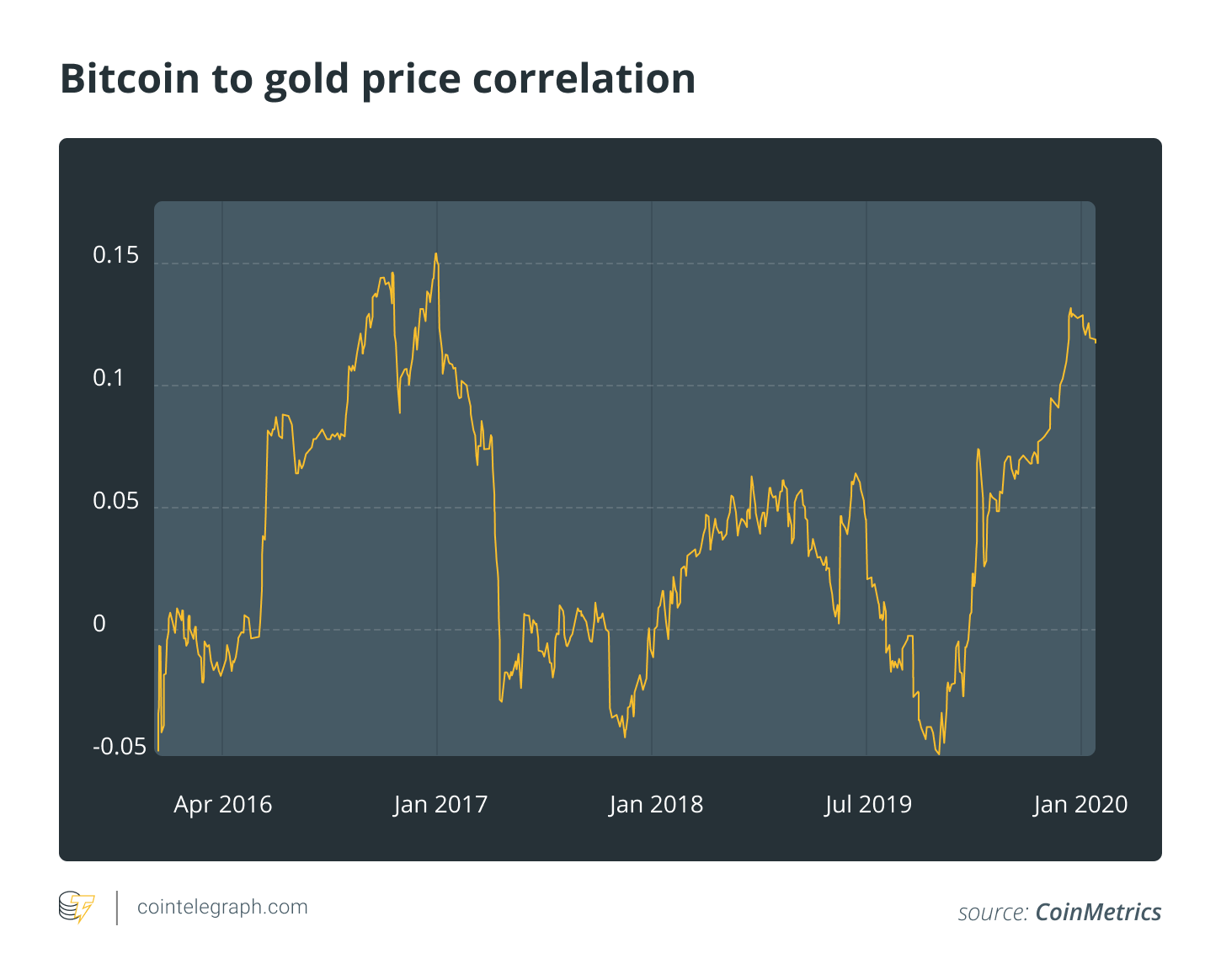 For one week, the Iran–United States military crisis gripped the crypto community. It began on Jan. 3 with a U.S. drone strike on a convoy traveling near Baghdad International Airport, killing Iranian major general Qasem Soleimani of the Islamic Revolutionary Guard Corps. The price of Bitcoin (BTC) soared.

As reported by Cointelegraph at the time, there is strong evidence to suggest that BTC’s price surge from $7,000 to nearly $8,500 is strongly linked to the tensions between the two nations. For example, the push toward $8,500 took place at the same time as mainstream media began to report on a retaliatory attack by Iran on the American forces based in Iraq.

According to data from Google Trends, the search term “Bitcoin Iran” surged 4,450% in the seven days to Jan. 8, Cointelegraph disclosed. The crisis spurred a surge in cryptocurrencies, the Nikkei Asian Review proclaimed, as “migrant workers and investors turn to ‘digital gold’ as financial conduit and safe haven.”

Nigel Green, CEO of the United Kingdom’s deVere Group, said on the matter: “This latest Bitcoin price increase underscores a mounting consensus that Bitcoin is becoming a flight-to-safety asset.”

Related: Bitcoin Is Becoming More Valuable to Iranians Amid Tensions With US

After U.S. President Donald Trump announced on Jan. 8 that he would seek no further military action against Iran following its U.S. air base bombings, the crisis was effectively over. At that point, it seemed that the BTC price retreated to the $8,000 mark, as reported by Cointelegraph.

All is quiet on the Iranian front, for now. That said, the crisis arguably inspired some new respect for Bitcoin and other cryptocurrencies — and also raised some questions.

“With an escalation in geopolitical turbulence, which typically unsettles traditional markets, it can be expected that a growing number of investors will decide to increase their exposure to decentralized, non-sovereign, secure currencies, such as Bitcoin,” commented Green. This new hedging group will include retail and institutional investors.

One might, indeed, see heightened demand for Bitcoin after the past week of tensions in the Middle East “as investors in the region may look to move funds away from traditional investments such as gold or global bonds,” Edward Moya, Senior Market Analyst at OANDA, told Cointelegraph. He added:

“Bitcoin may have seen a bottom put in place, and some investors may feel more confident that Bitcoin can reach $10,000 a lot easier than gold can return to its 2011 record highs just above the $1,900 level.”

Opinion isn’t uniform, however. Sima Baktas, founder of GlobalB Law told Cointelegraph that global tensions will play a big role in the short term, adding that:

“It’s important to remember that if Bitcoin becomes too popular a commodity in a country where the capital outflow is bringing down the local currency [e.g., Iran, Turkey] , it could become a victim of its own success and see the government step in to clamp down on investment.”

Did the crisis confirm that Bitcoin has become a flight-to-safety asset?

Green’s assessment on Bitcoin becoming a flight-to-safety asset has some qualified support, but not all agree completely. Moya believes that it may take some time before the assets may be counted as equals:

“Bitcoin at times has rallied alongside other well known safe-havens [e.g., gold, the U.S. dollar, Japanese yen], but it is far from becoming a more traditional flight-to-safety trade. Bitcoin lost most of its safe-haven trade allure after regulatory concerns grew in both China and the U.S. in the last half of the past year.”

“That’s not to say that Bitcoin is perceived as a flight-to-safety asset, as Bitcoin is not considered a low-risk investment relative to gold or silver.”

This isn’t the first time BTC price has surged during geopolitical tensions recently. “In August, it jumped as global stocks were rocked by the devaluation of China’s yuan during the trade war with the U.S.,” noted Green.

When Cointelegraph asked Mati Greenspan, founder of Quantum Economics, if his view of Bitcoin had changed significantly as a result of the Iran–U.S. crisis, he answered:

“Yes, it has. It was quite profound to see Bitcoin acting as a clear safe haven in the face of a global risk event.”

“Bitcoin jumped 5 per cent as news of the strikes broke around the world on Friday,” observed Green. “Simultaneously, the price of gold — known as the ultimate safe-haven asset — also moved higher.”

Bitcoin is living up to its reputation as “digital gold,” Green continued: It is a store of value like gold and is perceived as being resistant to inflation like gold, and, as a result, “it could potentially dethrone gold in the future as the world becomes increasingly digitalized.”

Again, Green’s sweeping view was endorsed only up to a point by others in the crypto community. Greenspan, for instance, wrote in a Jan. 6 newsletter, “The resemblance between digital gold and the physical stuff [BTC-GLD] is uncanny. They’ve basically been moving in a very similar pattern throughout most of last year.”

This is a departure, noted Greenspan, because, until recently, Bitcoin has been seen mostly as an uncorrelated asset that does not react directly to what’s happening in other markets. As reported by Cointelegraph, during the crisis, the price of oil also surged by 4% to just under $72 per barrel, while Dow Jones, S&P500 and Nasdaq saw slight pullbacks. That said, it may be premature to call BTC the new gold. Greenspan told Cointelegraph:

“Gold has been a backbone of the global economy for thousands of years and is a much more reliable safety asset. Bitcoin is only a decade old and still presents all kinds of existential risks. The hope is that it eventually becomes the new backbone of the digital economy, but it’s too early to make such a claim now.”

As has been widely reported, economically troubled Venezuela is a hotbed of crypto activity. As recently as December, Venezuela and Argentina set new peer-to-peer Bitcoin trading volume records, as citizens reportedly attempted to mitigate the inflation risks. However, one must be careful about generalizing from one country’s experience as Lurya told Cointelegraph:

“During the most recent anti-government protests, Iran experienced a complete internet shutdown. Some Iranian traders resorted to international travel in order to close their positions; others logged back into their accounts several days later only to find their positions liquidated; the crackdown will most likely serve as a major deterrent against speculative trading.”

Related: Five Countries Where Crypto Regulation Changed the Most in 2019

Blockchain adoption and cryptocurrency adoption are far from being one and the same, and there are plenty of countries with governments hostile toward cryptocurrency that are more than eager to adopt blockchain technology. Baktas added: “For Iranian investors, Bitcoin is the embodiment of financial independence for an economy that has been teetering on the brink of collapse.”

Iranians cannot invest openly on the NASDAQ or the London Stock Exchange, and investors have relatively few investment opportunities. Bitcoin has the attraction, too, of being a currency “that cannot be taken away–either by the Iranian government or foreign actors. It seems to me they’re just getting started.”

Before declaring crypto as a leading flight-to-safety option like gold, however, it might be wise to reflect again upon what actually happened in Iran when tensions rose in the past year. The authorities simply shut down the internet, meaning traders couldn’t easily apply their skills.

Programmers compensated for work abroad in BTC didn’t get paid, according to some reports. As Lurya told Cointelegraph, “It appears a decent internet connection is crypto’s newest Achilles heel,” adding:

“I cannot imagine cryptocurrency being more appealing than traditional flight-to-safety assets to anyone at the onset of conflict. If Iran were to experience further political unrest, I would expect Iranian margin traders to rush to abandon their positions in preparation for the likely event of another shutdown.”

Still, it seems clear that those who viewed crypto as a totally uncorrelated asset pre-crisis may have to reassess, given that the price of Bitcoin and other cryptos seemed to rise as world tensions ratcheted up, and subside along with the turmoil — much like gold and silver.